When on silent retreat, with no screen-time and no one to talk to, sitting by the fire became an important touchstone for me each evening, and I spent time most nights setting, tending, gazing at and thinking about fire.

This past winter on sabbatical I stayed at a new retreat center. When the sister who greeted me showed me around she made a special point to show me the common room and the fireplace and said she hoped we would light a fire during the retreat.

That night I as I looked into the fireplace, I noticed it had been totally set up for us- logs, kindling. All I had to do was light the corner of a piece of newspaper and the fire grew effortlessly. The retreat center was near empty this time of year, and no one joined me at the fire but taking time to light a fire for myself warmed and comforted my spirit.

The next night I came back and saw that the fire fairies did not come every day; things were as I had left them the night before and I was on my own.Fortunately there was a neat pile of wood, a basket of kindling, and a lighter.  I had a steep learning curve though; always before I had built fires in community. There was always a surplus of would be fire builders; everyone wanting to poke the logs, to add new logs. Now, alone and silent, there was no one around to help or give advice. The logs had trouble catching, and the fire often died back. I spent a lot of time futzing around with newspaper and kindling, rearranging things so that there was enough fuel to spark the larger logs, enough air to feed the fire. I saw time and time again that fire only spreads up, and that no matter how perfect your kindling is, if it is outside the path of the upward flames, it will not catch. Even once once the fire is burning strong, the parts of the logs outside that upward path of the flames will not be consumed, but by rotating a log to reveal that unused part to the flame an old log begins making its contribution to the fire again. 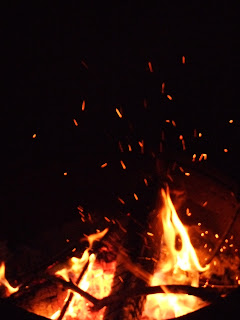 I thought about how my own spirit at that moment was like a fire burning low. I was encouraged to notice that a fire burning low does not necessarily need a new log, but maybe some kindling to get things going, maybe just some rearranging to bring the fuel where it is needed. So let’s pause for a moment to consider- where is your flame burning low? Where could you use a little kindling? What parts of your life do you want to bring closer to the center of the fire?

As I stared into the flames, I thought about you, my congregations; I thought about how folks had said they felt burnt out. Sure enough the logs in my fire did burn down over time. Tiny sticks would leap into dramatic flames, and disappear quickly. The big logs took a while to catch, but once the flames caught would burn for long enough that I could sit back and drink my tea, or read a few pages of my book, but even once the big logs are burning well, the fire still required care.

I thought about the ways that our congregations are really like a fire; they need little bits of fuel that burn hot, and they need big logs that feed the fire evenly for a long time. And if the fire were to continue, they needed new logs from time to time. Even the best laid fire needs help – they need someone to notice when the flames are burning low, when the logs are burning out,  to notice when they need new fuel,when they need to be rearranged. Sometimes we need to stir things up, making sure there is good air flow helps even when there is no more fuel to add.

As I gazed into the fire, it brought to mind a vision of our congregations that I’ve often shared: I imagine our congregations to be like a bonfire of love and hope, so that all who need to be feel the warmth of that love can come sit by our fire. These fires were burning long before we arrived, but because they have warmed us, we tend these fires of our Unitarian Universalist tradition, of our congregations so they may continue to warm all who need that love and inspiration decade after decade. We invite newcomers to our fire so that no one need feel cold and alone.


It occurs to me now that this fire for racial justice has been burning for a long time too- for hundreds of years, and sometimes it burns hot, and sometimes it’s just smoldering coals. Remember, fire is not an object, it is a PROCESS; in its fundamental nature, it is transformation. Fire changes what it touches, or it wouldn’t be fire. Right now the flames of transformation are burning hot. How can we keep the flames hot enough to make the transformation significant, and lasting? Take a moment to reflect- Which fires are you committed to sustaining and tending? Who is tending them? How might we invite others in? 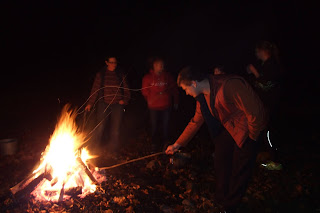 When I went on my second silent retreat this winter, I used what I had learned, and built and started a fire that first night. How happy I was when someone walking through the hall stopped to enjoy the warmth with me. How happy I was to have made the fire that warmed and comforted someone. Over the following evenings, other folks would come and sit by the fire, enjoying the flames and the silence for a while before heading off to bed. They gave me an appreciative smile and I felt glad I had helped created this space of community and warmth for them. But I wondered, did they want to be part of the firemaking? Were they holding themselves back from adding a log, worried about overstepping? I couldn’t just ask, because we were all keeping silent. So one night when there were a couple of other folks gathered around, and I thought it might soon be time to either add another log, or to let the fire find its natural end for the night. I got up and walked to the kitchen to get some tea. When I got back another woman was adding logs and clearly had things under control, so I sat and enjoyed her handiwork for a while before going to bed.

Another night I seemed to be the last one left at the fireplace. I stopped adding logs as I grew tired. The fire was just an orange glow when I left to get my chamomile tea. As I walked back through the fireside room on my way to bed, I saw a quiet man had taken the opportunity to sweep away the ashes and rebuild a fire from the bottom up using those glowing logs.

Fires are not meant to burn forever. At some point we have to step away. It is only when the fire is out that we can sweep away the ashes and make space for something new. When we step away from tending a fire we can do so in a way that ensures that the folks who come after us can make their own fire: A pile of wood and kindling invitingly and safely nearby. A fire circle cleared of brush and ready for a fresh start. I Invite you to reflect now, are there fires you are ready to stop feeding? And if so, are there ways you can prepare the way for those who come after to take over when you step away?

I’ve never “banked” a fire myself, but people in novels do it all the time. Apparently if you protect the coals just right they will still be hot in the morning if you are going to need a fire to , say, cook your breakfast.

This summer our 3 congregations are taking a break from a lot of our normal programs. We will be visiting other congregations in worship and not creating our own worship on zoom until September. Today we take a moment to “bank” our fire, to protect those glowing coals that they will be ready to reignite in the fall